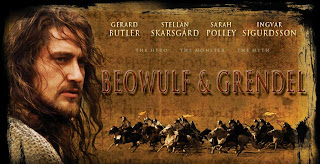 ometimes I need a break, and find challenge and pleasure elsewhere than in the Tudor world. This time I shall make an excursion towards a filmic adaptation of Beowulf I find worth meditating about. This adaptation is entitled Beowulf and Grendel (2005), directed by Sturla Gunnarsson, the script was written by Andrew Rai Berzins, the music was composed by Hilmar Örmi Hilmarsson. The director chose the beautiful landscapes of as a setting for the action, featuring Gerald Butler (Beowulf), Stellan Skarsgård (Hrothgar), Ingvar Eggert Sigurðsson (Grendel) and Sarah Polley ().
The film since its release has occasioned a great variety of responses ranging from condemnation to celebration. Most of the reviewers find the setting, the landscapes awesome, the actors fine. Beyond these the focus of their responses circles around issues of the script, faithfulness to the original, the relationship between the historic times and the contemporary claims of the movie and its political and moral aspects.
The script itself divides the responses into opinions sympathising with the changes to the “original,” and judgements finding it meaningless or ghastly. Ty Burr in his “Vistas aside, ‘Beowulf’ isn’t quite poetry in motion” scolds the film as “a watchably ludicrous mishmash. It features [...] dialogue by way of ‘Monty Python and the Holy Grail.’” In the Seattle Post-Intelligencer William Arnold finds the dialogues with its occasional four-lettered words a “near-fatal flaw.” Although Todd McCarthy in Variety observes that the comical aspect of the script “attempts to give a contemporary ring to the ancient story”, yet he does not make much sense of this observation. Script-writer, Andrew Lai Berzins claims in an interview about the language: “I wanted the dialogue to be accessible, colloquial, true to the characters, and—as much as possible—true to the time.” So the modernised language with its colloquialism is supposed to appeal to a modern audience and aims at harmonising with the qualities of characters.
As for the relation between past and present, i.e. the movie’s appeal for the 21st-century audience the reviewers also are divided into two camps. Celebrating the merging of the two temporal layers Bill Gallo in his “The Blood of a Poem” argues that in Beowulf and Grendel, the Old-English poem and “postmodern punk sensibility,” or Monty Python and “Teutonic literature” come together and produce a thought-provoking result. Another reviewer, Manohla Dargis in the New York Times claims the modernisation of the movie lies in that “ the filmmakers do what filmmakers often do when faced with their own lack of imagination: they toss a little sex in with the violence.” Ruth Johnston Staver in her A Companion to Beowulf nevertheless observes that the movie “is intended to be a faithful reproduction of the poem” (, C—: Greenwood Press, 2005, 195). Berzins also confesses that he intended to be “mostly true to the mood, to the obsession with fate […] to the bones of the story.”
Reviewers also call attention to the moral, moralising aspect of the movie ranging from psychoanalitical observations to moral and political undercurrents. In his review, Nathan Rabin sensitively observes that Grendel becomes a “metaphor for the unknown, the demonized ‘other’, the id.” J. T. Toshi in his Icons of Horror and the Supernatural claims that the movie “raises ethical questions about the nature of humans, monsters and monstrosity” (Westport, C-London: Greenwood Press, 2007, p. 346.) Mick LaSalle in his “Beowulf meets girl; girl meets troll. Eeew” accurately observes the possible political underpinnings of the film: “It's intended as a cautionary tale, in a sense, about needless military intervention, as well as a commentary on the danger of making sweeping moral assumptions in foreign policy—especially when dealing with trolls.” Even the script-writer emphasises this aspect in the interview above when asserting “[t]here’s a significant theme here of the dangers of tribalism.”
Keeping in mind this variety of responses and themes, I am going to focus on the presentation of heroism in this movie to be able to articulate a single narrative on the aforementioned themes. The presentation of heroism is conspicuous in Beowulf and Grendel as it frustrates the expectations of an audience waiting for grand speeches, dignity and honour, fighting scenes with spectacular choreography and mythical monsters. Opposed to these expectations, the filmic narrative intensely refashions Beowulf’s heroism into unexpected directions.
The forthcoming posts, appearing on Mondays, are going to present first a theoretical framework, next meditations about the narrative poem, and then about selected scenes from the movie. The very next post is going to ponder about the incommensurability of the two works, so as to divorce the film from the “original.” The next post will reconnect the two works, as I intend to ponder about the filmic adaptation in light of the Old-English poem. When analysing the poem, first I am going to present the concept of heroism in the narrative poem, second I am going to write about the ways heroism is gently undermined with parallelisms. Equipped with the “original” concept of heroism, I will turn my attention to the discussion of five relevant scenes from the film. 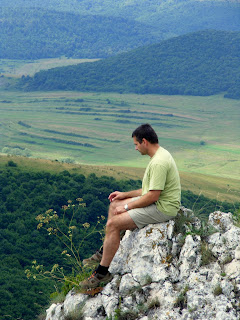 Let us go, then, You (dear reader) and I to this territory of mysteries and beauties every Monday for the sake of exploring and making sense of it—the ultimate aims of an excursion.
Posted by Zsolt Almási at 15:07 No comments: